How Better Understanding Your Audience Can Fuel Podcast Growth

When creating a podcast, research and data play a major role in understanding ones audience. Daryl and the Kast Media team shared how podcasts can use data to their advantage, by demonstrating how Kast Media was able to understand the demographics and listening habits of its “true crime” audience to influence Nighty Night’s marketing strategy and effectively target audiences that would be most likely to engage with the podcast.

Rabia’s audience grew quickly after launch. The session provided attendees with an inside look into Nighty Night’s podcast data, pulled from Triton Digital’s Demos+ in Q4 of 2021, to demonstrate the types of data Kast Media leveraged to better understand the show’s audience. For example, Demos+ data suggested that Nighty Night’s listeners were 41% male, 57% female, and 2% non-binary. And, most were between 25-34 years old, with a large portion also between 18-24 years old.

The session was a great example of recent advancements in podcast measurement and the capabilities solutions like Demos+ can provide. With Demos+, Kast Media was able to understand Nighty Night’s audiences’ education level, average income, and marital status. On top of that, Demos+ data revealed most listeners were heavy podcast listeners -- with many also watching YouTube daily, listening to radio, or even reading the newspaper. 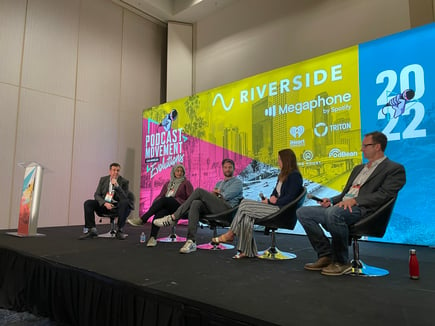 Understanding the type of people that would be interested in tuning into Nighty Night and which media platforms would be the most effective at reaching them not only guided the initial roadmap, but influenced the podcast’s ability to maintain a steady growth rate. Rabia and the Kast Media team discussed how after a show launches, they use Triton Digital’s Demos+ data to keep up momentum and tweak content along the way to better engage active listeners and decipher what is working, and what isn’t. Through the help of Triton Digital and Demos+, Nighty Night has maintained an 85% audience retention rate.